Create is a multi-purpose WordPress theme that gives you the power to create many different styles of websites.

In the world of off-grid power generation, the name Superwind is synonymous with survival. The reason many off-grid professionals chose our military grade, commercial quality micro-wind turbine is they have likely used cheaply constructed wind turbines in the past – units that underperformed once installed and failed rapidly when exposed to real world conditions. For those same professionals however, “survival” isn’t enough – a turbine also has to make reliable power. The German made Superwind 350 wind turbine it is the only micro-wind size turbine with a known commercial rating. Before we explain why, a little wind history is in order.

Micro-wind turbines (electric wind generators between 100 to 2000 watts) have been around for well over 50 years. They were fun for land-based hobbyists and useful on sailboats, for those sailors who knew when to turn them off in high winds so they didn’t self-destruct or worse yet, destroy their battery banks due to over-speed-based overcharging.

Two blades, four blades, five blades and even some six bladed rotors were stuck on an automotive alternator and called a “wind turbine”. As none of the blades were balanced, the result was noise, which is byproduct of vibration. Vibration comes from a lack of balance, which is the result of poor-quality components, poor workmanship, or both.

The higher the wind speed, the more noise and vibration created until a poorly constructed turbine finally blows apart. Once this occurs however, it finally does get quiet! 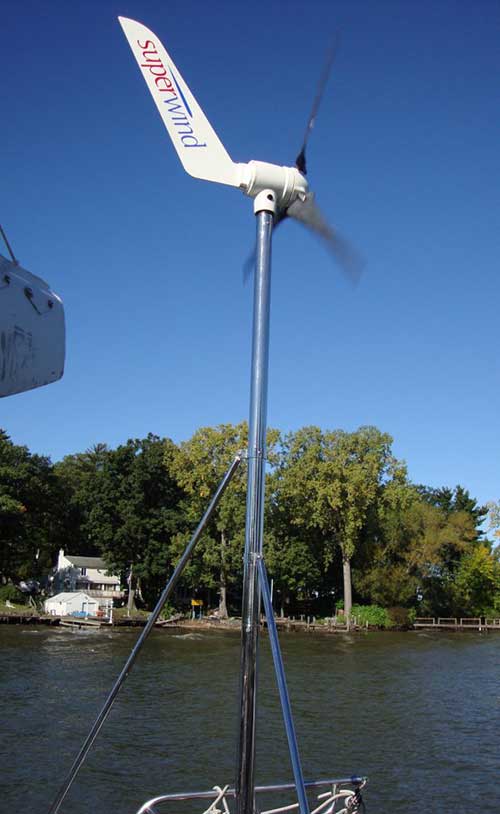 This all changed in 2002, when Martin van Egeren and Klaus Krieger founded superwind GmbH. They brought some much needed common sense to a chaotic industry, along with fascinating German engineering. By working directly with off-grid end users, Superwind could focus on meeting real-world needs.

Superwind turbines are made of the highest quality materials; salt water resistant aluminum alloy and stainless steel. They are built to exacting standards and must overcome scores of pass/fail assembly points and multiple inspection steps, even before being individually quality control tested when fully constructed.

Balance is only part of the success equation however. One of the most well-known turbine destroying factors is ‘over-speed’. When a low quality turbine is driven over-speed by exposure to high winds, it rapidly starts shaking its mast or rigging, heats and wears out its bearings, overpowers its stator and is forced to either absorb the energy as heat or discharge high amperage into the charge controller and/or overcharge fragile, but expensive battery banks.

In attempts to address the overspeed issue, cheaper turbines often employ a charge regulation system that drains power from the battery or banks in order to power their charge controller. Many of these same hobby turbines try to fool end users and off-grid professionals into using their equipment by claiming a110 mph survival speed, while their manuals state in small print that the unit must be turned OFF (not producing power) in winds as low as 35 to 40 mph to survive.

The commercially rated Superwind 350 provides autonomous over-speed control via its real world proven auto-feathering blade pitch mechanism, as well as a charge control system that uses no battery power whatsoever. As the lateral force of the wind moves the turbine into rated power speeds (about 23 knots), the blades automatically and individually change pitch into a passive angle to the wind force, in real time. This means that the blades’ ‘feathering action’ occurs in micro-moments and in millimeters of movement, with the blades automatically recovering to their normal position as the wind force lessens. The blades can actually pitch up to 40 degrees! The technology that allows this simple operation is quite remarkable, yet is robust enough to operate for a decade or more under marine, arctic and desert conditions.

The Superwind 350 will produce power from 4 m/S (7 mph) to 35 m/S (80 Mph) of wind speed while in the run or production mode (ON) and will survive 50 m/S (110 Mph) with the control switch placed in the OFF position. What this means is that while other wind turbines are struggling to simply stay intact in winds of 35 to 40 Mph, the Superwind 350 not only survives, but continues to produce maximum power up to 80 Mph.

Yet even ultra-quiet operation, an auto-feathering over-speed avoidance system, the highest quality saltwater materials and proven power production in modest to high winds was still not enough to satisfy the engineers at Superwind. With over twenty-five years of wind turbine experience, the Superwind team knew that a wind turbine does not work alone. It is part of a larger charging system and successful integration means more than simply selling a wind turbine and walking away. So Superwind set about to build a better charging strategy and in doing so changed the industry.

We were the first company to incorporate a dump load resistor into our into our charge controller system. This autonomous operation means the turbine can remain on unsupervised and generating power 24/7 when ample wind is present. By charging the batteries within the manufacturers specifications and diverting excess power only after the batteries are fully charged, we have created a charging system that is truly autonomous, reliable and highly efficient. Today, our system is so advanced that we are the only micro-wind turbine ‘Valance Verified’ – meaning we are qualified to charge Lithium Iron Magnesium Phosphate (LiFeMgPO4) batteries and energy storage systems. 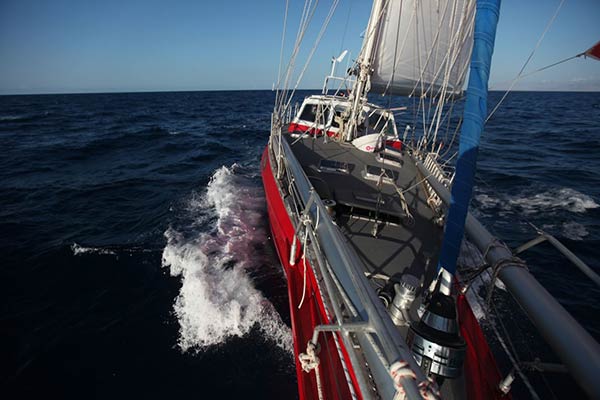 Another frequently asked question is whether the Superwind 350 turbine will work with other charge sources? The answer is YES! The Superwind 350 was designed to work in conjunction with solar panels, fuel cells, and even your vessel's engine. This translates to true fuel conservation advantages in areas with sufficient winds. 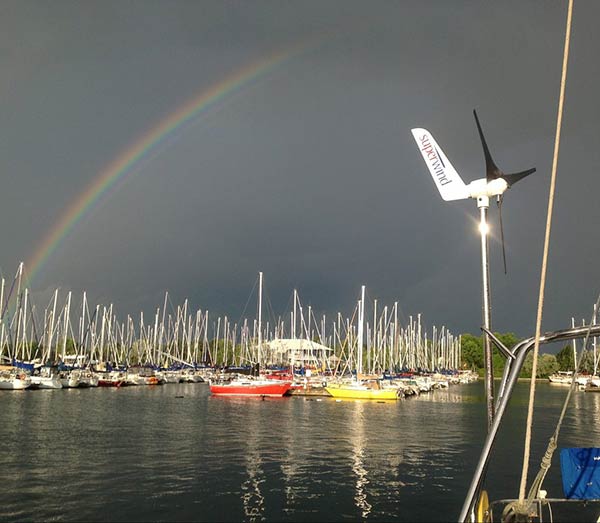 Hobby wind turbines can also generate electromagnetic interference that can interfere with satellite phones and long-range marine radio transmission & reception. The Superwind 350’s advanced design eliminates electronic noise and magnetic vibration by utilizing a brush-less offset AC stator to produce power. This, coupled with the addition of RF Gain dampeners to the DC rectifier, ensure that no interference is generated by the turbine during operation. Superwind 350 turbines produce DC power and are available in 12 VDC or 24 VDC systems. It is also worth mentioning that at no time do the special features of a Superwind turbine interfere with making power. Click here to see the Superwind 350 power curve.

Benjamin Franklin’s famous quote “The bitterness of poor quality remains long after the sweetness of low price is forgotten” could not be more applicable than to wind turbines. Once properly installed, the Superwind 350 can work for decades where the other turbines would likely fail in months or weeks. In this context, it can accurately be said that our reputation is based on the off-grid professional taking a $4,000.00 helicopter ride to install a micro-wind turbine at a mountain top communications tower to help power lifesaving equipment. You may ask if that’s the time to save money by using a cheap, hobby wind turbine. For our experienced customers, the answer is no way! That’s the reason every Superwind is tested to the same high standards, whether it is being installed on a life-saving tsunami detector buoy or your sailing vessel.

We will be the first to remind you that wind turbines work where there is ample wind resources, and many potential customers are surprised when, by experience, we suggest a superwind might not work for a given project. That is another superwind difference – you are working with trained professionals, not some E.Com/Store saying anything to sell. So to help you understand if your project and site is appropriate for using a superwind turbine, we welcome you to contact our staff or any of our authorized agents, anytime.